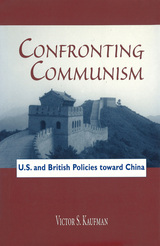 In Confronting Communism, Victor S. Kaufman examines how the United States and Great Britain were able to overcome serious disagreements over their respective approaches toward Communist China. Providing new insight into the workings of alliance politics, specifically the politics of the Anglo- American alliance, the book covers the period from 1948—a year before China became an area of contention between London and Washington—through twenty years of division to the gradual resolution of Anglo-American divergences over the People's Republic of China beginning in the mid-1960s. It ends in 1972, the year of President Richard Nixon's historic visit to the People's Republic, and also the year that Kaufman sees as bringing an end to the Anglo-American differences over China.

Kaufman traces the intricate and subtle pressures each ally faced in determining how to approach Beijing. The British aspect is of particular interest because Britain viewed itself as being within "three circles": Western Europe, the Atlantic alliance, and the Commonwealth. Important as well to British policy with respect to China was the concern about being dragged into another Korean-style conflict. The impact of decisions on these "circles," as well as the fear of another war, appeared time and again in Britain's decision making.

Kaufman shows how the alliance avoided division over China largely because Britain did the majority of the compromising. Reliant upon the United States militarily and financially, most U.K. officials made concessions to their Washington counterparts. Readers of Confronting Communism will come away with a better understanding of alliance politics. They will learn that such decision making, for both Great Britain and the United States, was a highly complex process, one that posed serious challenges to the Anglo-American alliance. Despite those challenges, accord between London and Washington prevailed.

Victor S. Kaufman is a lecturer in the Department of History at Southwest Missouri State University, in Springfield.