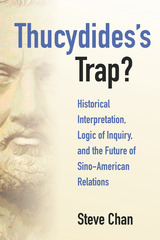 The Peloponnesian War (431–404 BCE) ostensibly arose because of the fear that a rising Athens would threaten Sparta’s power in the Mediterranean. The idea of Thucydides’ Trap warns that all rising powers threaten established powers. As China increases its power relative to the United States, the theory argues, the two nations are inevitably set on a collision course toward war. How enlightening is an analogy based on the ancient Greek world of 2,500 years ago for understanding contemporary international relations? How accurate is the depiction of the history of other large armed conflicts, such as the two world wars, as a challenge mounted by a rising power to displace an incumbent hegemon?Thucydides’s Trap?: Historical Interpretation, Logic of Inquiry, and the Future of Sino-American Relations offers a critique of the claims of Thucydides’s Trap and power-transition theory. It examines past instances of peaceful accommodation to uncover lessons that can ease the frictions in ongoing Sino-American relations.

Steve Chan is College Professor of Distinction at the University of Colorado at Boulder, where he teaches political science.


“This is one of the rare book-length treatments that refutes the ‘Thucydides Trap’ thesis and also challenges power transition and balance of power theories. Hence, it has value beyond the immediate questions in the China-US story. It makes an important contribution to the IR literature and will be read by scholars and practitioners alike.”
—T. V. Paul, James McGill Professor of International Relations at McGill University and the author of Restraining Great Powers: Soft Balancing from Empires to the Global Era— -