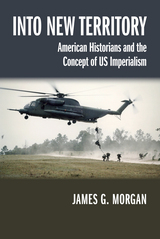 The idea that the United States—a nation founded after a war of independence—operates as an imperialist power on the world stage has gained considerable traction since the turn of the twenty-first century. But just a few decades earlier, this position was considered radical and even “un-American.” How did this dramatic change come about?
Tracing the emergence of the concept of US imperialism, James G. Morgan shows how radical and revisionist scholars in the 1950s and 1960s first challenged the paradigm of denying an American empire. As the Vietnam War created a critical flashpoint, bringing the idea of American imperialism into the US mainstream, radical students of the New Left turned toward Marxist critiques, admiring revolutionaries like Che Guevara. Simultaneously, a small school of revisionist scholars, led by historian William Appleman Williams at the University of Wisconsin, put forward a progressive, nuanced critique of American empire grounded in psychology, economics, and broader historical context. It is this more sophisticated strand of thinking, Morgan argues, which demonstrated that empire can be an effective analytical framework for studying US foreign policy, thus convincing American scholars to engage with the subject seriously for the first time.
AUTHOR BIOGRAPHY
James G. Morgan is an independent scholar and writer who earned his doctorate in history at the University of Southampton. He lives just outside London, England.
TABLE OF CONTENTS