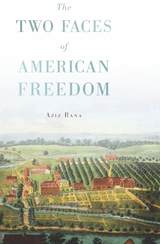 The Two Faces of American Freedom boldly reinterprets the American political tradition from the colonial period to modern times, placing issues of race relations, immigration, and presidentialism in the context of shifting notions of empire and citizenship. Today, while the U.S. enjoys tremendous military and economic power, citizens are increasingly insulated from everyday decision-making. This was not always the case. America, Aziz Rana argues, began as a settler society grounded in an ideal of freedom as the exercise of continuous self-rule—one that joined direct political participation with economic independence. However, this vision of freedom was politically bound to the subordination of marginalized groups, especially slaves, Native Americans, and women. These practices of liberty and exclusion were not separate currents, but rather two sides of the same coin.

However, at crucial moments, social movements sought to imagine freedom without either subordination or empire. By the mid-twentieth century, these efforts failed, resulting in the rise of hierarchical state and corporate institutions. This new framework presented national and economic security as society’s guiding commitments and nurtured a continual extension of America’s global reach. Rana envisions a democratic society that revives settler ideals, but combines them with meaningful inclusion for those currently at the margins of American life.

REVIEWS
This provocative book will interest all American historians… A brief review cannot do justice to the intricacy and subtlety of Rana’s argument. He deploys evidence from a dazzling range of sources, particularly but not exclusively from imaginative readings of pivotal court cases… The Two Faces of American Freedom…establishes Rana as a serious student of American democracy, and all readers of the Journal of American History should wrestle with his brilliant and passionate critique of ‘settler empire.’
-- James T. Kloppenberg Journal of American History


In The Two Faces of American Freedom, Rana effectively weaves together historical analysis, constitutional interpretation, and theoretical reflections, showing that empire is more deeply intertwined with American political institutions and their development than many observers realize… Both its compelling historical interpretation and its innovative examination of normative criticisms through the discussion of contemporary social critics make this an important book that neither students of American political and constitutional development nor those interested in political theory and thought can afford to ignore.
-- Stefan Heumann Political Science Quarterly


This is interpretive history, and, as the title indicates, it is interpretive history with bite… The Two Faces of American Freedom is a marvelous tract for our times… The best thing about this book is that Rana has compiled a wonderful pantheon of also-rans in American history who either offered alternatives to ‘settler society,’ or actually tried to fulfill its promise of freedom and equality… The book also includes novel and penetrating analysis of the work and thought of better-known figures in American history… [A] tour-de-force.
-- Stephen B. Presser Reviews in American History


[This] is a significant contribution to constitutional scholarship. One of the virtues of The Two Faces of American Freedom is Rana’s willingness to take intellectual risks… While Rana is not the first legal scholar to examine the link between republican freedom and imperial expansion in American constitutional history, he is the first to do so through the lens of settler colonial theory… By applying this theoretical framework, Rana offers a provocative and original narrative of how early American ideas of freedom and imperialism were interdependent, and together animated what was once a formative ideology underpinning American constitutional governance… The Two Faces of American Freedom is a significant theoretical accomplishment. It successfully taps the insights of a discipline unfamiliar to many legal scholars, and by doing so offers a novel interpretation of America’s constitutional past. This interpretation suggests new and challenging ways of thinking about the relationship between national power and domestic freedom.
-- Anthony O’Rourke Michigan Law Review


Overall, this book is masterfully crafted. To say that ideas matter is easy. To demonstrate how ideas inform and are informed by our understandings, practices, and institutions in a dynamic manner across a wide ideological and historical spectrum is quite another… The challenge Rana sets forth—politically, conceptually and methodologically—is daunting in that it captures the kind of urgency, creativity and diligence that every intellectual should aspire for.
-- Daniel Kato Constellations


Rana’s interpretation of the American past helps make sense of the Revolution’s democratic potential, and also the problems facing American democracy today.
-- Johann Neem Journal of Colonialism and Colonial History


[A] provocative, revisionist tale that finds the key to apparently contradictory strains in American political culture, political thought, and notions of citizenship in our own dual past as settler and colonizer… [It] seems clear that Rana’s re-telling of the American story is one that will be debated and should be reckoned with, both for its bold sidelong glance at familiar history—especially the manner in which it outlines the case for how and why we moved almost immediately from colony to colonizer—and for its potential implications for the present political moment. Scholars of immigration history and policy, American foreign policy, and American political thought will all find arguments worthy of consideration and deserving of their attention, along with fresh perspectives on what might ordinarily be stale terrain.
-- Stephen Pimpare Law & Politics Book Review


[An] ambitious and thoughtful book… The Two Faces of American Freedom [is] a challenging and often compelling book. It is well written, full of fresh interpretations of familiar debates, and unafraid to pose big questions and draw striking conclusions where others often fear to tread.
-- Duncan Ivison Perspectives on Politics


Two Faces of American Freedom is an impressive piece of historical scholarship… [Rana] provides insightful new interpretations of several critical points in the United States’ political development… It would be difficult to overstate the originality and importance of Rana’s portrayal of the American Revolution as ‘settler revolt.’… By making imperialism and settlerism central concepts in his approach to the American Revolution, Rana deals a devastating blow to scholarship committed to American exceptionalism, which has sequestered the study of American history and politics for too long. If this were Two Faces’ only contribution, it would be quite a worthy book, but in subsequent chapters, Rana extends his analysis through history, tracing the evolution of settlerism in the years between the ratification of the Constitution and the Civil War, and between Reconstruction and the turn of the twentieth century… In Two Faces, Rana uses the concept of settler colonialism to illuminate the American experience in an unassailably effective and innovative manner… Two Faces is a compelling work because it expands the compass of inquiry, opening the way to comparative approaches that were previously closed off by scholarly commitments to American exceptionalism.
-- Joshua Simon Settler Colonial Studies


Rana makes a compelling case for a populist account of self-rule at the heart of the U.S. political tradition.
-- M. G. Spencer Choice


This is a genuinely important book, offering a fundamental reinterpretation of American constitutional development.
-- Bruce Ackerman, Yale Law School, author of The Decline and Fall of the American Republic


Will put the concept of settler freedom on the map of scholarship on American political thought, political development, and democratic theory.
-- Rogers Smith, University of Pennsylvania

TABLE OF CONTENTS
Contents
Introduction: Liberty and Empire in the American Experience
1. Settler Revolt and the Foundations of American Freedom
2. Citizens and Subjects in Postcolonial America
3. The Populist Challenge and the Unraveling of Settler Society
4. Plebiscitary Politics and the New Constitutional Order
Conclusion: Democracy and Inclusion in the Age of American Hegemony
Notes
Acknowledgments
Index