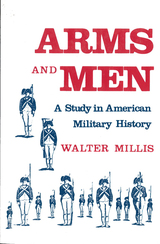 Arms and Men: A Study in American Military History
by Walter Millis
Rutgers University Press, 1981
Paper: 978-0-8135-0931-0
"A classic..., a brilliant interpretation of the origins of mass warfare. In Arms and Men, Walter Millis has helped to explain not only how war has come to dominate our age, but the often troubled, anomalous relationship between the military and the rest of American society. For everyone, from the beginning student to the advanced scholar, there is not a more comprehensive, more stimulating, or more lively introduction to the men, the ideas, the policies, and the forces that have shaped the development of American military power."
--Richard H. Kohn

"In my opinion Arms and Men is a splendid piece of work, clearly organized, well argued and beautifully written. We have long needed an informed and intelligent commentary on the evolution of American military policy; and in Mr. Millis' book we have it. I think that his book will awaken great interest and be widely used. I am sure also that professional students of the subject will find it possible, after reading this book, to see the course of American military affairs with a new perspective. That is one of the great services performed by Mr. Millis. He has covered the whole subject with authority, but - thank heaven - in a short book, in which the arguments are not blunted by unnecessary detail."
--Gordon A. Craig

"This author knows weapons, politics and human nature. His perceptive grasp of these complexes shines in the writing."
--The New York Times