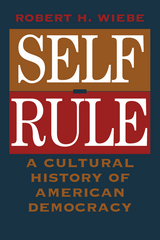 Something profoundly important occurred in early 19th century America that came to be called democracy. Since then hundreds of millions of people worldwide have operated on the assumption that democracy exists. Yet definitions of democracy are surprisingly vague and remarkably few reckon with its history. In Self-Rule, Robert Wiebe suggests that only in appreciating that history can we recognize how breathtaking democracy's arrival was, how extraordinary its spread has been, and how uncertain its prospects are.

American democracy arrived abruptly in the 19th century; it changed just as dramatically early in the 20th. Hence, Self-Rule divides the history of American democracy into two halves: a 19th century half covering the 1820s to the present, and a 20th century half, with a major transition from the 1890s to the 1920s between them. As Wiebe explains why the original democracy of the early 19th century represented a sharp break from the past, he recreates in vivid detail the way European visitors contrasted the radical character of American democracy with their own societies. He then discusses the operation of various 19th century democratic publics, including a nationwide public, the People. Finally, he places democracy's white fraternal world of equals in a larger environment where other Americans who differed by class, race, and gender, developed their own relations to democracy.

Wiebe then picks up the history of democracy in the 1920s and carries it to the present. Individualism, once integrated with collective self-governance in the 19th century, becomes the driving force behind 20th century democracy. During those same years, other ways of defining good government and sound public policy shunt majoritarian practices to one side. Late in the 20th century, these two great themes in the history of American democracy—individualism and majoritarianism—turn on one another in modern democracy's war on itself.

Finally, Self-Rule assesses the polarized state of contemporary American democracy. Putting the judgments of sixty-odd commentators from Kevin Phillips and E.J. Dionne to Robert Bellah and Benjamin Barber to the test of history, Wiebe offers his own suggestions on the meaning and direction of today's democracy. This sweeping work explains how the history of American democracy has brought us here and how that same history invites us to create a different future.
TABLE OF CONTENTS