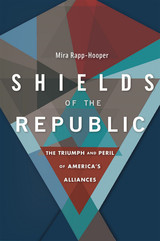 Is America’s alliance system so quietly effective that politicians and voters fail to appreciate its importance in delivering the security they take for granted?

For the first century and a half of its existence, the United States had just one alliance—a valuable but highly controversial military arrangement with France. Largely out of deference to George Washington’s warnings against the dangers of “entangling alliances,” subsequent American presidents did not consider entering another until the Second World War. Then everything suddenly changed. Between 1948 and 1955, US leaders extended defensive security guarantees to twenty-three countries in Europe and Asia. Seventy years later, the United States had allied with thirty-seven.

In Shields of the Republic, Mira Rapp-Hooper reveals the remarkable success of America’s unprecedented system of alliances. During the Cold War, a grand strategy focused on allied defense, deterrence, and assurance helped to keep the peace at far lower material and political costs than its critics allege. When the Soviet Union collapsed, however, the United States lost the adversary the system was designed to combat. Its alliances remained without a core strategic logic, leaving them newly vulnerable.

Today the alliance system is threatened from without and within. China and Russia seek to break America’s alliances through conflict and non-military erosion. Meanwhile, US politicians and voters are increasingly skeptical of alliances’ costs and benefits and believe we may be better off without them. But what if the alliance system is a victim of its own quiet success? Rapp-Hooper argues that America’s national security requires alliances that deter and defend against military and non-military conflict alike. The alliance system is past due for a post–Cold War overhaul, but it remains critical to the country’s safety and prosperity in the 21st century.

REVIEWS
A learned rationale and blueprint for that reinvigoration of alliances. Rapp-Hooper takes on directly and convincingly the Trumpian critique that alliances are not worth the investment and have led the nation to fight other people’s battles for them…Her deep erudition, crisp prose style, and innate brilliance shine through on most every page.
-- Jeremy Shapiro Boston Review


Despite enduring support among the U.S. public for the alliance system, President Donald Trump seems determined to upend it, as Mira Rapp-Hooper observes in her astute new book defending U.S. alliances…The threat of COVID-19 has bolstered her argument, making plain both the importance of the alliance system and the imperative to adapt alliances to new ends.
-- Sam Winter-Levy and Nikita Lalwani Foreign Policy


For seventy years, alliances have been central to American foreign policy. Where did they come from and where are they going? Mira Rapp-Hooper gives smart answers to both the historical and future questions about our alliances.
-- Joseph S. Nye, Jr., author of Do Morals Matter? Presidents and Foreign Policy from FDR to Trump


Shields of the Republic will stand as the definitive study of US alliances, filling a scholarly gap at a time when America cannot afford to go it alone in an increasingly dangerous world.
-- Michael J. Green, former Senior Director for Asia, National Security Council


The precarity of America’s alliances is one of the central political issues confronting the United States today. Mira Rapp-Hooper has delivered the essential guide for understanding these complex partnerships. This is a masterful exposition of how alliances can both extend and restrain American power in these transformative times.
-- Kurt Campbell, cofounder and CEO of The Asia Group and former Assistant Secretary of State for East Asian and Pacific Affairs


Shields of the Republic is a must-read—an invaluable resource for exploring timely and thorny questions about the role of alliances in American foreign policy.
-- Elizabeth N. Saunders, author of Leaders at War: How Presidents Shape Military Interventions


Rapp-Hooper musters rock-solid evidence to demonstrate what policymakers have long believed: that America’s alliances are a remarkably effective foreign policy tool. Just as importantly, she gives an unambiguous account of why this system must be preserved and lays out a compelling plan for how to do so.
-- Stephen Hadley, Principal at RiceHadleyGates and former National Security Advisor


[A] perceptive look at America’s alliance system since World War II…Rapp-Hooper aims to counter the ignorant America First narrative by proving the value of alliances to the United States itself…She shows that defensive pacts served their intended objectives. The alliances, most importantly, also put American security first. Not only did they provide an adequate bang for a well-invested buck, but without them, America’s safety would have been at grave risk.
-- Thomas Zeiler E-International Relations