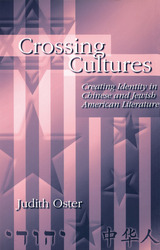 In this important new study, Judith Oster looks at the literature of Chinese Americans and Jewish Americans in relation to each other. Examining what is most at issue for both groups as they live between two cultures, languages, and environments, Oster focuses on the struggles of protagonists to form identities that are necessarily bicultural and always in process. Recognizing what poststructuralism has demonstrated regarding the instability of the subject and the impossibility of a unitary identity, Oster contends that the writers of these works are attempting to shore up the fragments, to construct, through their texts, some sort of wholeness and to answer at least partially the questions Who am I? and Where do I belong?
Oster also examines the relationship of the reader to these texts. When encountering texts written by and about “others,” readers enter a world different from their own, only to find that the book has become mirrorlike, reflecting aspects of themselves: they encounter identity struggles that are familiar but writ large, more dramatic, and set in alien environments.
Among the figures Oster considers are writers of autobiographical works like Maxine Hong Kingston and Eva Hoffman and writers of fiction: Amy Tan, Anzia Yezierska, Henry Roth, Philip Roth, Cynthia Ozick, Lan Samantha Chang, and Frank Chin. In explicating their work, Oster uses Lacan’s idea of the “mirror stage,” research in language acquisition and bilingualism, the reader-response theories of Iser and Wimmers, and the identity theories of Charles Taylor, Emile Benveniste, and others.
Oster provides detailed analyses of mirrors and doubling in bicultural texts; the relationships between language and identity and between language and culture; and code-switching and interlanguage (English expressed in a foreign syntax). She discusses food and hunger as metaphors that express the urgent need to hear and tell stories on the part of those forging a bicultural identity. She also shows how American schooling can undermine the home culture’s deepest values, exacerbating children’s conflicts within their families and within themselves. In a chapter on theories of autobiography, Oster looks at the act of writing and how the page becomes a home that bicultural writers create for themselves. Written in an engaging, readable style, this is a valuable contribution to the field of multicultural literary criticism.
AUTHOR BIOGRAPHY
Judith Oster is Associate Professor of English at Case Western Reserve University in Cleveland, Ohio. She is the author of Toward Robert Frost: The Reader and the Poet and From Reading to Writing: A Rhetoric and Reader.
TABLE OF CONTENTS