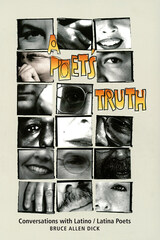 Among students and aficionados of contemporary literature, the work of Latina and Latino poets holds a particular fascination. Through works imbued with fire and passion, these writers have kindled new enthusiasm in their compatriots and admiration in non-Latino readers. This book brings together recent interviews with fifteen Latino/a poets, a cross-section of Chicano, Puerto Rican, and Cuban voices who discuss not only their work but also related issues that help define their place in American literature. Each talks at length about the craft of his or her poetry—both the influences and the process behind it—and takes a stand on social and political issues affecting Latinos across the United States.

The interviews feature both established writers published as early as the 1960s and emerging artists, each of whom has enjoyed success in other literary forms also. As Bruce Dick's insightful questions reveal, the key threads linking these writers are their connections to their families and communities and their concern for civil rights—believing like Chicana writer Pat Mora that "the work of the poet is for the people." The interviews also reveal diversity among and within the three communities, from Victor Hernández Cruz, who traces Latino collective identity to Africa and claims that all Latinos are "swimming in olive oil," to Cuban writer Gustavo Perez Firmat, who considers nationality more important than ethnicity and says that "the term Latino erases [his] nationality."

The dialogues also offer new insights on the place of Chicano/a writings in the U.S.-Mexico borderlands, on the Puerto Rican/Nuyorican establishment, and on the anti-Castro stand of Cuban-born poets. As these writers answer questions about their work, background, ethnic identity, and political ideology, they provide a wealth of biographical, intellectual, and literary material collected here for the first time. A Poet's Truth is a provocative and revealing book that not only conveys the fire of these writers' passions but also sheds important light on a whole literary movement.