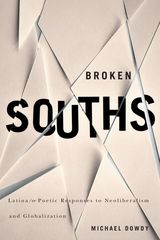 Dowdy argues that a transnational Latina/o imaginary has emerged in response to neoliberalism—the free-market philosophy that underpins what many in the northern hemisphere refer to as “globalization.” His work examines how poets represent the places that have been “broken” by globalization’s political, economic, and environmental upheavals. Broken Souths locates the roots of the new imaginary in 1968, when the Mexican student movement crested and the Chicano and Nuyorican movements emerged in the United States. It theorizes that Latina/o poetics negotiates tensions between the late 1960s’ oppositional, collective identities and the present day’s radical individualisms and discourses of assimilation, including the “post-colonial,” “post-national,” and “post-revolutionary.” Dowdy is particularly interested in how Latina/o poetics reframes debates in cultural studies and critical geography on the relation between place, space, and nature.