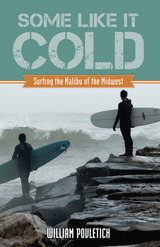 chronicles the true story of twin brothers Lee and Larry Williams, whose love of surfing evolved in the most unlikely of geographies: off the shores of Lake Michigan. From their boyhood home in Sheboygan, Wisconsin, the brothers trekked to the local beach with their longboards and their dreams to master the waves at spots like the Elbow and the Cove. The next six decades proved that their zeal for catching grinders and barrels was much more than a hobby.

Surfing in the cold had its challenges, and Lee and Larry recall stories of freak storms, ice-encrusted beaches, and near drownings, along with the usual hypothermia, helped but not cured by their customized cold-water wetsuits. Despite living nearly 2,000 miles from either coast, Lee and Larry have made a lifestyle out of freshwater surfing, recreating their hometown as "The Malibu of the Midwest" and gaining international fame as hosts of the Dairyland Surf Classic.

With humor and wit, author William Povletich brings their tale of revolutionizing surf culture to the page.

AUTHOR BIOGRAPHY
Native Wisconsinite William Povletich is the author of Green Bay Packers: Trials, Triumphs and Tradition (Wisconsin Historical Society Press, 2012) and Milwaukee Braves: Heroes and Heartbreak (Wisconsin Historical Society Press, 2009) as well as numerous magazine articles on sports and entertainment. The Emmy Award-nominated and Peabody Award-winning documentary filmmaker is the producer of E!’s Botched and the Food Network’s Trisha’s Southern Kitchen.
REVIEWS
This book focuses on the lives of twin brothers, Lee and Larry Williams and their quest to earn the respect of the surfing brotherhood, both for themselves and inland surfing... I gained an insight into the surfing culture, the sense of adventure that drives one to mount those waves, the migration of surfing from the South Pacific to around the world and what makes Sheboygan such a great place to surf.(Jim Gallen, Reviewer, June 2016)