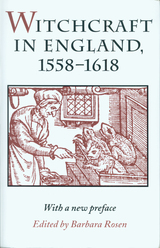 Witchcraft in England, 1558-1618
edited by Barbara Rosen
University of Massachusetts Press, 1991
Paper: 978-0-87023-753-9
Anyone interested in manifestations of witchcraft in Elizabethan and Jacobean England will find this book an invaluable source. Barbara Rosen has gathered and edited a rare collection of documents--pamphlets, reports, trial accounts, and other material--that describes the experience, interpretation, and punishment of witchcraft in the late sixteenth and early seventeenth centuries. In her introduction, Rosen explores the full range of practices and beliefs associated with witchcraft and situates these phenomena in historical context. She explains how ignorance of science and medicine combined with social circumstance and religious ideology to shape popular perceptions and superstitions. Distinguishing between English and Continental forms of witchcraft, she also examines the legal definitions, disciplines, and punishments applied to wizards, witches, wise women, and conjures in the Elizabethan age. The pamphlets and other original texts have been modernized in certain respects to make them more accessible to general readers. But the book retains its value for scholars: omissions are detailed in the notes and additions marked; obsolete words and grammar are explained in the glossary. Originally published in England in 1970 under the title Witchcraft, this book appears now for the first time in paperback and includes a new preface by the editor.
AUTHOR BIOGRAPHY
Barbara Rosen has retired from the University of Connecticut where she was associate professor of English.