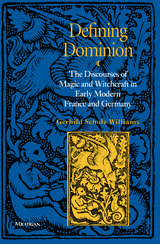 In this intriguing volume, Gerhild Scholz Williams explores the roles of magic and demonology in France and Germany in the fifteenth and sixteenth centuries. She guides the reader through a variety of texts--many of them popular and influential in their day--to illuminate how magic came to shape people's perceptions of a changing world. This comprehensive study looks at magic as an intellectual and cultural language, as an attempt to explain the world, and as a means to control and confine women, whose propensity for satanic dalliance threatened not just their own souls but the health of the larger society.
". . . Williams has done an exemplary job of analyzing the intersection of the discourses of magic (as related to women and witchcraft), discovery, and religious diversity/dissidence to explain how the confluence of these discourses eventually 'determined who occupied society's center and who was forced to move to, or remain at, its margins.' . . . Gerhild Scholz Williams is no dilettante grazing in the greener pastures of other disciplines. She has been laboring assiduously in these neighboring fields for years now, and it is breathtaking to see how all of her disparate projects have come together so elegantly articulated in this one volume." --Susan L. Cocalis, German Studies Review
Gerhild Scholz Williams is Professor of German and Comparative Literature, Washington University, St. Louis.
REQUEST ACCESSIBLE FILE