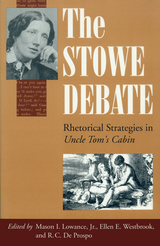 The Stowe Debate: Rhetorical Strategies in "Uncle Tom's Cabin"
edited by Mason I. Lowance, Ellen E. Westbrook, R. De Prospo, R. C. De Prospo, Ellen E. Westbrook and R. C. De Prospo
University of Massachusetts Press, 1994
Paper: 978-0-87023-952-6
This collection of essays addresses the continuing controversy surrounding Uncle Tom's Cabin. On publication in 1852, Harriet Beecher Stowe's novel sparked a national debate about the nature of slavery and the character of those who embraced it. Since then, critics have used the book to illuminate a host of issues dealing with race, gender, politics, and religion in antebellum America. They have also argued about Stowe's rhetorical strategies and the literary conventions she appropriated to give her book such unique force.

The thirteen contributors to this volume enter these debates from a variety of critical perspectives. They address questions of language and ideology, the tradition of the sentimental novel, biblical influences, and the rhetoric of antislavery discourse. As much as they disagree on various points, they share a keen interest in the cultural work that texts can do and an appreciation of the enduring power of Uncle Tom's Cabin.