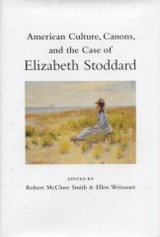 Elizabeth Stoddard was a gifted writer of fiction, poetry, and journalism; successfully published within her own lifetime; esteemed by such writers as William Dean Howells and Nathaniel Hawthorne; and situated at the epicenter of New York’s literary world. Nonetheless, she has been almost excluded from literary memory and importance. This book seeks to understand why. By reconsidering Stoddard’s life and work and her current marginal status in the evolving canon of American literary studies, it raises important questions about women’s writing in the 19th century and canon formation in the 20th century.

Essays in this study locate Stoddard in the context of her contemporaries, such as Dickinson and Hawthorne, while others situate her work in the context of major 19th-century cultural forces and issues, among them the Civil War and Reconstruction, race and ethnicity, anorexia and female invalidism, nationalism and localism, and incest. One essay examines the development of Stoddard’s work in the light of her biography, and others probe her stylistic and philosophic originality, the journalistic roots of her voice, and the elliptical themes of her short fiction. Stoddard’s lifelong project to articulate the nature and dynamics of woman’s subjectivity, her challenging treatment of female appetite and will, and her depiction of the complex and often ambivalent relationships that white middle-class women had to their domestic spaces are also thoughtfully considered.

The editors argue that the neglect of Elizabeth Stoddard’s contribution to American literature is a compelling example of the contingency of critical values and the instability of literary history. This study asks the question, “Will Stoddard endure?” Will she continue to drift into oblivion or will a new generation of readers and critics secure her tenuous legacy?

Ellen Weinauer is associate professor of English and the Director of the Women’s Studies Program at the University of Southern Mississippi in Hattiesburg.