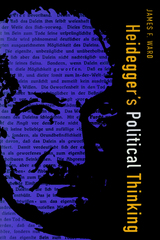 Heidegger's Political Thinking
by James F. Ward
University of Massachusetts Press, 1995
Paper: 978-0-87023-970-0
This work presents an examination of the political philosophy of Martin Heidegger. It uncovers the political content of Heidegger's thinking on such topics as the temporality of Being, the role of science in the crisis of the West and the presumed special status and destiny of the German people