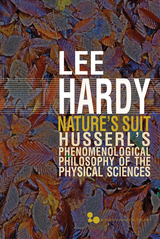 Edmund Husserl, founder of the phenomenological movement, is usually read as an idealist in his metaphysics and an instrumentalist in his philosophy of science. In Nature’s Suit, Lee Hardy argues that both views represent a serious misreading of Husserl’s texts.

Drawing upon the full range of Husserl’s major published works together with material from Husserl’s unpublished manuscripts, Hardy develops a consistent interpretation of Husserl’s conception of logic as a theory of science, his phenomenological account of truth and rationality, his ontology of the physical thing and mathematical objectivity, his account of the process of idealization in the physical sciences, and his approach to the phenomenological clarification and critique of scientific knowledge. Offering a jargon-free explanation of the basic principles of Husserl’s phenomenology, Nature’s Suit provides an excellent introduction to the philosophy of Edmund Husserl as well as a focused examination of his potential contributions to the philosophy of science.

While the majority of research on Husserl’s philosophy of the sciences focuses on the critique of science in his late work, The Crisis of European Sciences, Lee Hardy covers the entire breadth of Husserl’s reflections on science in a systematic fashion, contextualizing Husserl’s phenomenological critique to demonstrate that it is entirely compatible with the theoretical dimensions of contemporary science.

Lee Hardy is a professor of philosophy at Calvin College, Grand Rapids, Michigan.