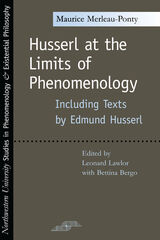 Combining Maurice Merleau-Ponty's 1960 course notes on Edmund Husserl's "The Origin of Geometry," his course summary, related texts, and critical essays, this collection offers a unique and welcome glimpse into both Merleau-Ponty's nuanced reading of Husserl's famed late writings and his persistent effort to track the very genesis of truth through the incarnate idealization of language.
AUTHOR BIOGRAPHY
MAURICE MERLEAU-PONTY (1908–1961) is the author of Adventures of the Dialectic, Consciousness and the Acquisition of Language, In Praise of Philosophy, The Primacy of Perception, The Prose of the World, Signs, Themes from the Lectures at the Collège de France, 1952-1960, and The Visible and the Invisible, all published by Northwestern University Press.

LEONARD LAWLOR is a professor of philosophy at the University of Memphis. He is the author of Derrida and Husserl: The Basic Problem of Phenomenology and Imagination and Chance: The Difference between the Thought of Ricoeur and cotranslator of Jean Hyppolite's Logic and Existence. He is also the coeditor of the annual Chiasmi International: Trilingual Studies concerning the Thought of Merleau-Ponty.
BETTINA BERGO is an assistant professor in the department of philosophy at Duquesne University. She is the author of Levinas between Ethics and Politics: For the Beauty that Adorns Earth, translator of Levinas's Of God Who Comes to Mind, and cotranslator of Levinas's God, Death, and Time.
TABLE OF CONTENTS

Part 1. Husserl at the Limits of Phenomenology
Maurice Merleau-Ponty

Part 2. "The Origin of Geometry" and Related Texts
Edmund Husserl

3. The Origin of Geometry
4. Foundational Investigations of the Phenomenological Origin of the Spatiality of Nature: The Originary Ark, the Earth, Does Not Move
5. The World of the Living Present and the Constitution of the Surrounding World that Is Outside the Flesh