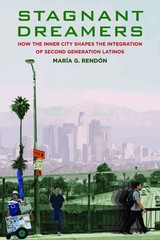 A quarter of young adults in the U.S. today are the children of immigrants, and Latinos are the largest minority group.  In Stagnant Dreamers, sociologist and social policy expert María Rendón follows 42 young men from two high-poverty Los Angeles neighborhoods as they transition into adulthood. Based on in-depth interviews and ethnographic observations with them and their immigrant parents, Stagnant Dreamers describes the challenges they face coming of age in the inner city and accessing higher education and good jobs, and demonstrates how family-based social ties and community institutions can serve as buffers against neighborhood violence, chronic poverty, incarceration, and other negative outcomes.

Neighborhoods in East and South Central Los Angeles were sites of acute gang violence that peaked in the 1990s, shattering any romantic notions of American life held by the immigrant parents. Yet, Rendón finds that their children are generally optimistic about their life chances and determined to make good on their parents’ sacrifices. Most are strongly oriented towards work. But despite high rates of employment, most earn modest wages and rely on kinship networks for labor market connections. Those who made social connections outside of their family and neighborhood contexts, more often found higher quality jobs. However, a middle-class lifestyle remains elusive for most, even for college graduates.

Rendón debunks fears of downward assimilation among second-generation Latinos, noting that most of her subjects were employed and many had gone on to college. She questions the ability of institutions of higher education to fully integrate low-income students of color. She shares the story of one Ivy League college graduate who finds himself working in the same low-wage jobs as his parents and peers who did not attend college. Ironically, students who leave their neighborhoods to pursue higher education are often the most exposed to racism, discrimination, and classism.

Rendón demonstrates the importance of social supports in helping second-generation immigrant youth succeed. To further the integration of second-generation Latinos, she suggests investing in community organizations, combating criminalization of Latino youth, and fully integrating them into higher education institutions. Stagnant Dreamers presents a realistic yet hopeful account of how the Latino second generation is attempting to realize its vision of the American dream.

María Rendón is assistant professor in the department of urban planning and public policy at the University of California, Irvine.