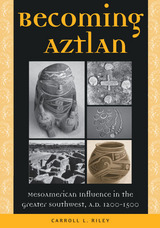 Becoming Aztlan: Mesoamerican Ingluence in the Greater Southwest, A.D. 1200-1500
by Carroll L Riley
University of Utah Press, 2005
Cloth: 978-0-87480-828-5
For decades archaeologists insisted that southwestern cultures such as the Anasazi, Hohokam, and Mogollon had little or no relation to peoples south of the "border"' Now American archaeology is beginning to take seriously the notion that goods, gods, and even humans may have passed with some frequency between the high cultures of Mexico and the Southwest.

In his latest book, Carroll Riley presents an ambitious overview of the continuities he sees in the geographically vast and culturally complex American Southwest and the adjacent northwest of Mexico. Aided by extensive illustrations, he argues that although the Southwest remained "southwestern" in its basic economy, there were drastic changes beginning around A.D. 1200 that transformed socio-religious life throughout the region. Riley calls this period Aztlan, a name adopted from the mythic Aztec land of origin. A Pueblo Indian in A.D. 800 would have gathered and farmed the same foods as his descendants, but by 1400 those distant relatives had a very different concept of the physical and spiritual universe.

In addition to bringing vast erudition and jargon-free prose to bear on a complex subject, Riley’s conclusions have potentially sweeping implications for the future of archaeological studies in the greater Southwest.
AUTHOR BIOGRAPHY
Carroll Riley is the author of more than 20 books, including Rio del Norte: People of the Upper Rio Grande from Earliest Times to the Pueblo Revolt and The Kachina and the Cross: Indians and Spaniards in the Early Southwest, both available from the University of Utah Press.
TABLE OF CONTENTS

1. Introduction
2. Why Aztlan?
3. Landscapes, Cultural and Natural
4. Before Aztlan
5. The Great Anasazi Migrations
6. The Shaping of the Midlands
7. Building Aztlan in the North
8. The Casas Grandes World
9. Sonora and the Trading Connection
10. A Multiplicity of Tongues
11. The New Order
12. Aftermath