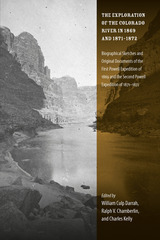 The Exploration of the Colorado River in 1869 and 1871-1872: Biographical Sketches and Original Documents of the First Powell Expedition of 1869 and the Second Powell Expedition of 1871-1872
edited by William Culp Darrah, Ralph V Chamberlin and Charles Kelly
University of Utah Press, 2009
Paper: 978-0-87480-963-3
Volume fifteen of the Utah Historical Quarterly, originally published in 1947, was primarily devoted to Powell’s initial reconnaissance of the canyons of the Green and Colorado rivers, an expedition that would prove to be the last great exploration through unknown country in the continental United States. Powell and nine companions launched from Green River Station, Wyoming, on May 24, 1869, embarking on a journey that would become a race against starvation and death and grow tragic with the deaths of three of the party at the hands of the Shivwits (Paiute) Indians. The maps, field notes, and journals of this first exploration would guide Powell when he returned to the canyons in 1871 for a second expedition.
This volume contains the journals of Major John Wesley Powell, George Young Bradley, Walter Henry Powell, and J. C. Sumner. Also included are various letters and notes by the members of the first expedition, and the journal of Francis Marion Bishop from the second expedition. All of the writings offer vivid descriptions of both adventure and of able and energetic scientific field work, and are of enduring interest and importance.
Copublished with the Utah State Historical Society.
AUTHOR BIOGRAPHY
Major John Wesley Powell (1834-1902) fought for the Union in the Civil War, becoming a major while losing his right arm. He later served as director of the Bureau of Ethnology at the Smithsonian and he was the second director of the United States Geological Survey.
George Young Bradley (1836-1885) left his position with the U.S. Infantry to join Powell’s first expedition as a chief boatman and to assist in geological work.
Walter Henry Powell (1842-1915) was invited on the expedition by his brother in hopes it would help him recover from the mental and emotional turmoil he suffered as a prisoner of war during the Civil War. His July 3, 1869 letter to the Chicago Evening Journal is reprinted here.
Oramel G. Howland (1883-1869) was tasked by Powell with mapping the river and taking notes throughout the expedition. He, his brother Seneca Howland, and William Dunn left the expedition on August 28, 1869, only days before the larger party reached the Virgin River. The three men were killed by Shivwit Indians as they attempted to climb out of the canyons.
John C. Sumner (1840-1907) was a first-rate marksman and good boatman, Sumner was an excellent manager of the expedition’s lead boat. The status of his journal has been controversial over the years, as various copies and transcriptions have surfaced.
Francis Marion Bishop (1843-1933) joined the second expedition as topographer, making the first map of the Colorado River based upon actual field measurements and data. He left the expedition after completing the map, not staying to survey the plateaus of Utah and Arizona.
REQUEST ACCESSIBLE FILE