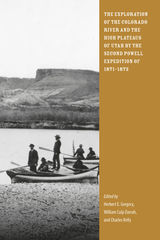 The Exploration of the Colorado River and the High Plateaus of Utah by the Second Powell Expedition of 1871-1872
edited by Herbert E Gregory, William Culp Darrah and Charles Kelly
University of Utah Press, 2009
Paper: 978-0-87480-964-0
The second Powell Colorado River exploration, consisting of eleven men and three boats at the time of launch, departed from Green River Station, Wyoming, on May 22, 1871. Most members kept journals, and this volume contains the writings of three men, Stephen Vandiver Jones, John F. Steward, and Walter Clement Powell, as well as excerpts from the journals of John Wesley Powell. Taken together, they provide diverse points of views about the second expedition, both in terms of its human components and in its scientific labors.
Originally published from 1948 to 1949 as volumes sixteen and seventeen of the Utah Historical Quarterly, this volume looks to the larger significance and fruits of the second of Powell’s explorations, a more carefully constituted and better equipped scientific operation, yet one strangely neglected in historical records. Copublished with the Utah State Historical Society.
AUTHOR BIOGRAPHY
Stephen Vandiver Jones (1840-1920) left his position as a principal in Washburn, Illinois, to serve as assistant topographer on the second expedition. He wrote relatively little about himself or his companions in his journals, choosing instead to focus his records on the typical tasks of a topographer: instrumental observations, sketches, and mathematical calculations.
John F. Steward (1841-1915) joined the Powell expedition as assistant geologist, but he was forced to resign his post when the exertion required by the exploratory work combined with a rheumatic affliction and an old war injury to nearly disable him.
His journal is frank, honest, and informative, and his technical geological notes surpassed on occasion the detail of even Major Powell.
Walter Clement Powell (1850-1883) was first cousin of Major Powell and joined the expedition as assistant to E. O. Beaman, the official photographer. His journal focused on the personalities rather than the science of the expedition, and his picturesque and lively entries provide the fullest understanding of the day-to-day joys and sorrows, achievements and frustrations of the expedition.
REQUEST ACCESSIBLE FILE