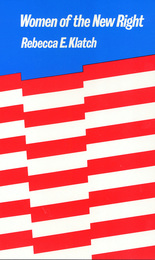 Although an array of commentary and analyses focus on the New Right, little has been done to tell us who the women are on this side of the political spectrum. Are they social conservatives who call for the reassertion of traditional family values as promulgated by the federal government? Or do they align themselves with laissez-faire conservatives who abhor government intervention yet, like social conservatives, favor increased defense spending, and condemn communism and secular humanism. Rebecca E. Klatch provides the first coherent picture of who joins such movements and how they think.

This book draws upon a rich data source which includes in-depth interviews and field research at right-wing conferences and meetings. Rather than the image of right-wing women as a monolithic group of angry housewives who oppose feminism, the author finds a fundamental division among women of the New Right, with one constituency of women actually supporting part of the feminist vision. Analyzing varying perceptions of women of the New Right, the book examines their beliefs and values, their vision of America, their interpretations of Communism, big government, and feminism, as well as their view of themselves as women and as political actors.

Rebecca E. Klatch is Assistant Professor of Sociology at the University of California, Santa Cruz.