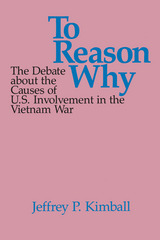 To Reason Why
by Jeffrey Kimball
Temple University Press, 1990
Cloth: 978-0-87722-709-0
This anthology provides a comprehensive overview of the major theories about the causes of American involvement in Southeast Asia from 1945 to 1975. Presenting the often conflicting arguments advanced by national leaders, policy makers, strategists, historians, social scientists, journalists, and activists, this volume represents the major reasons why and how the U.S. became involved, diplomatically and militarily, in the quagmire of Vietnam. As the first book to focus on the debate about the reasoning and causes of U.S. involvement, it fills a major gap in the study of the Vietnam war.
REQUEST ACCESSIBLE FILE