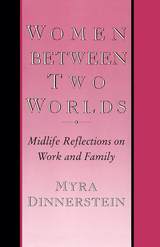 Myra Dinnerstein examines the choices and compromises of a generation of women who came of age after World War II. Her in-depth study traces the experiences of twenty-two middle-class women from childhood to adulthood and their evolution from traditional wives and mothers to career women at midlife. Her richly detailed interviews explore the tensions of combining work, marriage, and family life and remind us of the significance of one's social and personal context with respect to the ability to make satisfying choices.

Middle-class women born between 1936 and 1944 have been split between two worlds. As they were growing up, traditional expectations and limited opportunities seemed to make marriage and motherhood inevitable choices. When they reached their thirties, the Women's Movement and expanding opportunities in the workplace presented options for them that had not been available to their mothers. Now it was considered appropriate for women to have ambitions and to act on them--and the women described in this book were among those who did.
TABLE OF CONTENTS
CONTENTS
Preface
Acknowledgments
Study Participants
CHAPTER I: Introduction
CHAPTER 2: Growing Up Female: The Possible and the Appropriate
CHAPTER 3: Becoming Adult Women
CHAPTER 4: At Home
CHAPTER 5: From Housewives to Career Women
CHAPTER 6: The Persistence of Domesticity
CHAPTER 7: Between Two Worlds
CHAPTER 8: Conclusion
Notes
Bibliography
Index
REQUEST ACCESSIBLE FILE