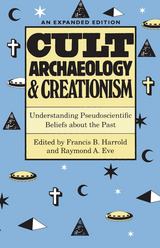 Cult Archaeology and Creationism: Understanding Pseudoscientific Beliefs about the Past
edited by Francis B. Harrold and Raymond A. Eve
University of Iowa Press, 1995
Paper: 978-0-87745-513-4

UFOs and aliens, unexplained mysteries, religious cults, diffusion, creationism. We are all familiar with beliefs about human life that lie outside traditional scientific boundaries. Notions such as these are considered reasonable by vast numbers of us in the Western world, in our modern “technological” and “educated” cultures.

Understanding why this should be so and how we as a society might deal with these widespread pseudoscientific beliefs are the subjects at the heart of this study. The authors—specialists in anthropology, archaeology, sociology, psychology, and history—explore creationism, which claims that there is evidence to support a literal interpretation of the origins of the world and of humanity as narrated in the Book of Genesis, and cult archaeology, which encompasses a wide range of fantastic beliefs about our past.

Cult Archaeology and Creationism contains several essays on the history of pseudoscientific beliefs and their current manifestations as well as the results of a unique research project in which students at five campuses across the country were asked about their beliefs and about such background factors as their school experience and religious faith. This expanded edition also includes two new essays, one on Afrocentrism and another that views cult archaeology and creationism in the 1990s and beyond.