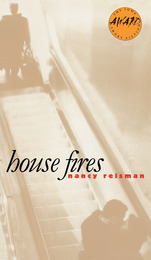 House Fires
by Nancy Reisman
University of Iowa Press, 1999
Paper: 978-0-87745-692-6
These eleven stories travel from snowbound Buffalo in the 1940s to present-day Boston, Providence, and San Francisco and across the domestic terrain of desire's unruly claims to the nuances of grief. In the title story, a young woman whose sister has been killed in a fire reckons with her parents' silent suffering and finds transcendence through film. In a series of stories set in post-World War II Buffalo and Manhattan, the members of a close-knit Jewish family are caught up in a maze of clandestine desires—none of which can be fulfilled. The collection's final series turns to one family's complex generational links: a college student confronted by her own assumptions about race and sexuality; a grandmother slipping into mental decline; a middle-aged mother juggling bewilderment, love, and grief.
Passion and heartbreak are often intertwined in these stories as Reisman reveals the ways in which women and men are inevitably shaped by their histories and the ways in which their bodies carry the legacy of loss.
AUTHOR BIOGRAPHY
Nancy Reisman earned an MFA from the University of Massachusetts at Amherst. She is the recipient of fellowships from the National Endowment for the Arts, the Wisconsin Institute for Creative Writing, the Fine Arts Work Center in Provincetown, and the Rhode Island State Council on the Arts. Her stories have appeared in Lilith, Glimmer Train, and American Fiction. She was the winner of the 1996 Raymond Carver Award.
TABLE OF CONTENTS