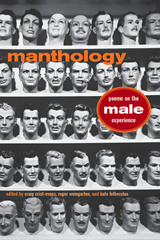 Manthology: Poems on the Male Experience
edited by Craig Crist-Evans, Roger Weingarten and Kate Fetherston
University of Iowa Press, 2006
Paper: 978-0-87745-988-0
Why focus an anthology of poems on the male experience when, for centuries, men have pretty much dominated everything from politics to the literary canon? Hasn't everything that can be said about the male experience already been said? This collection proves that the answer is a resounding no.Each of the anthology's ninety-three poems spotlights an individual experience that nonetheless becomes universal. Together poems from ninety-three poets---twenty-six of them female---take on self-doubt, fatherhood, sex, death, relationships, work, war, peace, and a diversity of other topics to form a perceptive and insightful collection. “The idea isn't so much that the poems celebrate men as that they challenge the reader to discover for him or herself what is male about the poem,” says Billy Collins about the collection. Humorous, sad, celebratory, and thoughtful, Manthology gathers a surprising group of poems focused on the almost poignant intensity of the male experience, with its attendant urgencies, confusions, and hilarities.Contributors includeMarvin Bell, Robert Bly, Christopher Buckley, David Clewell, Billy Collins, Mark Doty, Rita Dove, Stuart Dybek, Lynn Emanuel, Dana Gioia, Ray González, Tony Hoagland, David Lehman, Philip Levine, Bret Lott, Campbell McGrath, Naomi Shihab Nye, Maureen Seaton, Betsy Sholl, David St. John, Charles Harper Webb, David Wojahn, and many more
AUTHOR BIOGRAPHY
Craig Crist-Evans (1954-2005) was the author of two books of poems and a longtime contributing editor for the Bloomsbury Review. He co-developed, directed, and taught in the MFA in Writing for Children and Young Adults Program at Vermont College and later developed and directed the Writing Center at the Writing across the Curriculum Program at Mercersburg Academy in Pennsylvania. Kate Fetherston holds an MFA from Vermont College. She has published poems and essays in literary journals including Hunger Mountain, Poetry Miscellany, Artful Dodge, and Third Coast. The winner of a Vermont Arts Council award, she resides in Montpelier, Vermont. Roger Weingarten is the author of eight collections of poetry and coeditor of three other poetry anthologies. His poems have appeared in publications including the New Yorker, the American Poetry Review, Poetry, the New Republic, and the Kenyon Review and his awards include a National Endowment for the Arts Award and an Ingram Merrill Award in Literature. He teaches in the MFA in Writing Program and the Postgraduate Writers' Conference at Vermont College.
REVIEWS

“There's no telling from poem to poem where this brilliant 'conversation' about maleness and gender will lead---there are poems about husbands and wives, parents and children, Elvis, Apollo, Walt Whitman, rhythms of its politics. Manthology is a remarkably honest and enormously heartening collection.”---Nancy Eimers, author of A Grammar to Waking

“Manthology casts a wide net to capture a provocative, idiosyncratic range of takes on the male experience. One of the worst things we as men can do is take ourselves too seriously, for the consequences of doing that are indeed very serious, and the editors of this fresh, unpredictable anthology clearly recognize that. The editors do not attempt to resolve any arguments with their selections, but maybe to create a few along the way---it's a spirited collection from start to finish.”---Jim Daniels, author of Show and Tell: New and Selected Poems