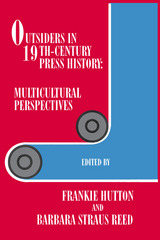 Outsiders in 19th-Century Press History: Multicultural Perspectives
edited by Frankie Hutton and Barbara Straus Reed
University of Wisconsin Press, 1995
Paper: 978-0-87972-688-1
This anthology of journalism history brings together essays on the early Black press, pioneer Jewish journalism, Spanish-language newspapers, Native American newspapers, woman suffrage, peace advocacy, and Chinese American and Mormon publications. It shows how marginal groups developed their own journalism to counter the prejudices and misconceptions of the white establishment press. The essays address the important questions of freedom of expression in religious matters as well as the domains of race and gender.
AUTHOR BIOGRAPHY
Frankie Hutton is the author of The Early Black Press in America, 1827–1860. Barbara Straus Reed is associate professor of journalism and mass media at Rutgers University.
REVIEWS
"A fascinating commentary on the ability of ostracized segments of society to speak for themselves in spite of public ridicule and prejudice."—Maurine H. Beasley, University of Maryland