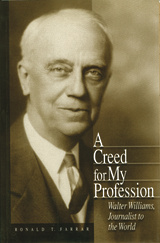 This superb biography provides for the first time a candid look at the remarkable life of Walter Williams, the man who founded the world's first school of journalism and perhaps contributed more toward the promotion of professional journalism than any other person of his time.

Williams, the youngest of six children, was born in Boonville, Missouri, in 1864. Never an athletic child, he always had a love of books and of learning; yet, he scarcely had a high school education. He began his journalistic career as a printer's devil at seventy cents per week and eventually became editor and part- owner of a weekly in Columbia, Missouri. During his time as an editor, Williams became convinced that journalism would never reach its potential until its practitioners had the opportunity for university training in their field. After years of crusading, he established the first journalism school, on the University of Missouri campus. Later, he was chosen president of the University of Missouri, which he led with distinction during the Great Depression.

Williams was an unwavering advocate of high professional standards. His Journalist's Creed became one of the most widely circulated codes of professional ethics. Williams inspired the confidence of his fellow journalists, and he carried his message to nearly every country in which newspapers were published. Not only did he invent journalism education, he also created global organizations of journalists and spread the gospel of professionalism throughout the world. His death, in 1935, was mourned throughout the United States, and editorial tributes came from around the world. As one British editor succinctly put it, "Williams was not born to greatness. Neither was it thrust upon him. Literally, he achieved greatness."

Ronald T. Farrar, a former newspaperman, is Reynolds-Faunt Memorial Professor of Journalism and Associate Dean for Graduate Studies and Research at the University of South Carolina in Columbia. He is the author of numerous books, including most recently The Law of Advertising and Public Relations.