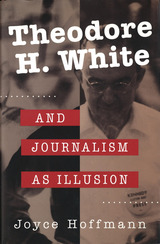 In this groundbreaking study, Joyce Hoffmann examines a critical twenty-five-year period in the work of one of the most influential journalists of the twentieth century. Theodore H. White was already a celebrated reporter when Jacqueline Kennedy summoned him for an exclusive interview in the aftermath of her husband's assassination. With her help, White would preserve what the First Lady claimed had been John F. Kennedy's vision of the New Frontier as an incarnation of that wistful, romantic kingdom--Camelot. Over the years, friends and advisers to Kennedy declared that they had never heard the president speak of Camelot. But White's article, which ran in Life magazine, created a myth that still endures in the popular consciousness.

That story was just one of many by Theodore White that had a lasting impact on the nation. As a correspondent for several of the country's most popular magazines, he covered the crucial events of the 1940s, '50s, and '60s. His best-selling book The Making of the President 1960 changed political reporting forever.

A gifted and likable man with a remarkable skill for ingratiating himself with others, White earned the confidence of key political, military, and diplomatic leaders. First in the Far East, later in Europe, and finally in Washington, D.C., he became a confidant and adviser rather than an adversary to the figures he covered for the news, following a pattern set by elite journalists. Even as he played the impartial reporter, White kept secrets in order to maintain access to his important sources, and he occasionally allowed his subjects, including John F. Kennedy and Nelson Rockefeller, to make changes in his work before publication.

Clinging to the illusion of objectivity, White--like other leading journalists in the postwar years--wrote about the world not as it was but as he believed it ought to be. Hoffmann relates the little-known episode in White's career when he intentionally obscured the truth about Chiang Kai-shek's corrupt and inept Nationalist government because he believed that undermining China's cause would be "a disservice to democracy."

No other book so thoroughly documents how a first-rank journalist can become a political insider and distort the news without losing the gloss of impartiality that is supposed to accompany the profession. Impressively researched, skillfully written, Theodore H. White and Journalism as Illusion is an unflinching look at a key figure in the history of American journalism and at the profession itself.