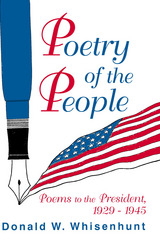 Poetry of the People: Poems to the President, 1929–1945
by Donald W. Whisenhunt
University of Wisconsin Press, 1996
Paper: 978-0-87972-704-8
The Great Depression was one of the most traumatic events of recent American history. Donald W. Whisenhunt has analyzed, and provided context for, the vast collection of poetry and song lyrics in the Hoover and Roosevelt presidential libraries to assess another aspect of American public opinion.
The poets of the era voiced their opinions on virtually every subject. They wrote about New Deal agencies, they praised and condemned Hoover and Roosevelt. They expressed their views about the Supreme Court, the third term, and the approaching war in Europe. The resulting study, arranged topically rather than chronologically, provides a unique perspective on American popular culture and American politics.
TABLE OF CONTENTS