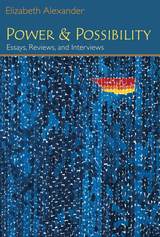 Elizabeth Alexander is considered one of the country's most gifted contemporary poets, and the publication of her essays in The Black Interior in 2004 established her as an astute critic and cultural commentator as well. Arnold Rampersad has called Alexander "one of the brightest stars in our literary sky . . . a superb, invaluable commentator on the American scene." In this new collection of her essays, reviews, and interviews, Alexander again focuses on African American artistic production, particularly poetry, and the cultural contexts in which it is created and experienced.

Elizabeth Alexander received a B.A. from Yale University, an M.A. from Boston University, and a Ph.D. in English from the University of Pennsylvania. She has published four books of poems: The Venus Hottentot (1990); Body of Life (1996); Antebellum Dream Book (2001); and, most recently, American Sublime (2005), which was one of three finalists for the Pulitzer Prize. Her play, Diva Studies, was produced at the Yale School of Drama. She is presently Professor of American and African American Studies at Yale University.