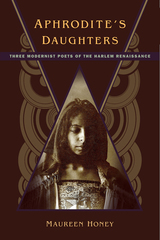 Maureen Honey paints a vivid portrait of three African American women—Angelina Weld Grimké, Gwendolyn B. Bennett, and Mae V. Cowdery—who came from very different backgrounds but converged in late 1920s Harlem to leave a major mark on the literary landscape. She examines the varied ways these poets articulated female sexual desire, ranging from Grimké’s invocation of a Sapphic goddess figure to Cowdery’s frank depiction of bisexual erotics to Bennett’s risky exploration of the borders between sexual pleasure and pain. Yet Honey also considers how they were united in their commitment to the female body as a primary source of meaning, strength, and transcendence.

The product of extensive archival research, Aphrodite’s Daughters draws from Grimké, Bennett, and Cowdery’s published and unpublished poetry, along with rare periodicals and biographical materials, to immerse us in the lives of these remarkable women and the world in which they lived. It thus not only shows us how their artistic contributions and cultural interventions were vital to their own era, but also demonstrates how the poetic heart of their work keeps on beating.
AUTHOR BIOGRAPHY
MAUREEN HONEY is a professor of English and women’s and gender studies at the University of Nebraska-Lincoln. She is the author or editor of numerous works including Shadowed Dreams: Women’s Poetry of the Harlem Renaissance and Double-Take: A Revisionist Harlem Renaissance Anthology (both by Rutgers University Press).
REVIEWS
"An excellent book on a trio of under-read and often misunderstood poets. Maureen Honey's portrait of this unique cadre of modernists reveals the fascinating conflicts of politics and poetics that exemplify the Harlem Renaissance's artistic production."
— Cherene Sherrard-Johnson, author of Dorothy West's Paradise: A Biography of Class and Color

"Honey has made a remarkable case for the restoration and addition of these three remarkable women in to their rightful place in the canon."
— Gay & Lesbian Review Worldwide

"In this biographical and critical study, Honey focuses on three poets she introduced to many with her groundbreaking anthology Shadowed Dreams: Women’s Poetry of the Harlem Renaissance ... Each poet is treated separately and chronologically, and the poems are examined in the context of the writer’s life and of the limits placed on educated, talented women in the early part of the 20th century ... Highly recommended."
— Choice