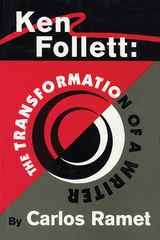 Carlos Ramet focuses on the artistic development and cultural implications of the best-selling author of works such as Eye of the Needle (1978), The Pillars of the Earth (1989), and The Hammer of Eden (1998). Beginning with his earliest published novel, The Big Needle (1974), Ramet explores the tension between the popular and the serious that has underlain much of Follett’s work. Ramet examines this writer’s blending of genres, film adaptations of his novels, and his keen ability to extend his readership through a “hybridization” process. Ramet linguistically analyzes Follett’s flexibility with literary forms; explores archetypal patterns; and demonstrates that Follett’s involvement in British politics is reflected not only in his latest works but has been implied by his novels from the start.