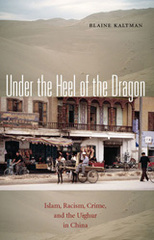 The Turkic Muslims known as the Uighur have long faced social and economic disadvantages in China because of their minority status. Under the Heel of the Dragon: Islam, Racism, Crime, and the Uighur in China offers a unique insight into current conflicts resulting from the rise of Islamic fundamentalism and the Chinese government’s oppression of religious minorities, issues that have heightened the degree of polarization between the Uighur and the dominant Chinese ethnic group, the Han.

Author Blaine Kaltman’s study is based on in-depth interviews that he conducted in Chinese without the aid of an interpreter or the knowledge of the Chinese government. These riveting conversations expose the thoughts of a wide socioeconomic spectrum of Han and Uighur, revealing their mutual prejudices. The Uighur believe that the Han discriminate against them in almost every aspect of their lives, and this perception of racism motivates Uighur prejudice against the Han.

Kaltman reports that criminal activity by Uighur is directed against their perceived oppressors, the Han Chinese. Uighur also resist Han authority by flouting the laws—such as tax and licensing regulations or prohibitions on the use or sale of hashish—that they consider to be imposed on them by an alien regime. Under the Heel of the Dragon offers a unique insight into a misunderstood world and a detailed explanation of the cultural perceptions that drive these misconceptions.