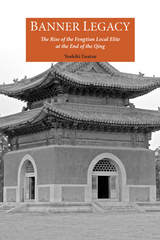 The Eight Banners is increasingly recognized as a key institution of the Qing dynasty administration. In Banner Legacy, Professor Enatsu argues that at the end of the Qing, as this region was placed under civil administration, many Han bannermen in the newly created Fengtian Province came to local prominence, first as landlords, then as power elites—active participants in provincial politics—through the reforms of the late Qing and the early Republic. Key local leaders such as Yuan Jinkai, Zhang Rong, Zhang Huangxiang, Wu Jingliang, and Wang Yuquan may be traced to the roles of the Han Banners.
Drawing on classic Japanese and Chinese resources on the area and recent scholarship, Banner Legacy uncovers the interplay between historical Qing institutions and emerging modern political practices during this tumultuous period.
REQUEST ACCESSIBLE FILE