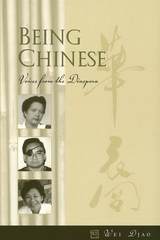 Chinese have traveled the globe for centuries, and today people of Chinese ancestry live all over the world. They are the Huayi or "Chinese overseas" and can be found not only in the thriving Chinese communities of the United States, Canada, and Southeast, but also in enclaves as far-reaching as Cuba, Zimbabwe, and Peru. In this book, twenty-two Chinese living and working outside of China—ordinary people from all walks of life—tell us something about their lives and about what it means to be Chinese in non-Chinese societies.

In these pages we meet a surgeon raised in Singapore but westernized in London who still believes in the value of Chinese medicine, which "revitalizes you in ways that Western medicine cannot understand." A member of the Chinese Canadian community who bridles at the insistence that you can't be Chinese unless you speak a Chinese dialect, because "Even though I do not have the Chinese language, I think my ability to manifest many things in Chinese culture to others in English is still very important." Individuals all loyal to their countries of citizenship who continue to observe the customs of their ancestral home to varying degrees, whether performing rites in memory of ancestors, practicing fengshui, wearing jade for good luck, or giving out red packets of lucky money for New Year.

What emerges from many of these accounts is a selective adherence to Chinese values. One person cites a high regard for elders, for high achievement, and for the sense of togetherness fostered by his culture. Another, the bride in an arranged marriage to a transplanted Chinese man, speaks highly of her relationship: "It's the Chinese way to put in the effort and persevere." Several of the stories consider the difference between how Chinese women overseas actually live and the stereotypes of how they ought to live. One writes: "Coming from a traditional Chinese family, which placed value on sons and not on daughters, it was necessary for me to assert my own direction in life rather than to follow in the traditional paths of obedience." Bracketing the testimonies are an overview of the history of emigration from China and an assessment of the extent to which the Chinese overseas retain elements of Chinese culture in their lives.

In compiling these personal accounts, Wei Djao, who was born in China and now lives near Seattle, undertook a quest that took her not only to many countries but also to the inner landscapes of the heart. Being Chinese is a highly personal book that bares the aspirations, despairs, and triumphs of real people as it makes an insightful and lasting contribution to Chinese diasporic studies.

AUTHOR BIOGRAPHY
Wei Djao grew up in Shanghai and taught in Canada, Hong Kong, and California before settling in Seattle to teach at North Seattle Community College. In addition to publishing widely in sociology, she has been involved in the production of television documentaries, including American Nurse, an award-winning program about a Chinese American army nurse in the Vietnam war.
TABLE OF CONTENTS