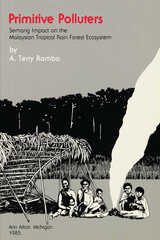 In the 1970s, A. Terry Rambo conducted fieldwork in Peninsular Malaysia with a group of Semang people. The community he studied had a seminomadic lifestyle: at times they stayed in houses or lean-tos in a village, and at other times they foraged in the surrounding rain forest for food. Rambo’s goal was to assess this group’s impact on the local environment. He found that, through domestic fires and cigarette smoking, they caused significant air pollution at the household level, but because of their small population size, they did not have much of an ecological impact.
TABLE OF CONTENTS
Contents
Tables
Plates
Foreword
Preface
1. Introduction
2. A Conceptual Framework for Studying Human Impacts on the Environment
3. The Semang and Their Ecosystem
4. The Impact of the Semang on Their Ecosystem
5. Conclusions: The Evolution of Human Relations with the Environment
Plates
References
REQUEST ACCESSIBLE FILE