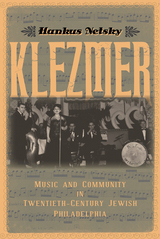 Klezmer presents a lively and detailed overview of the folk musical tradition as practiced in Philadelphia's twentieth-century Jewish community. Through interviews, archival research, and recordings, Hankus Netsky constructs an ethnographic portrait of Philadelphia’s Jewish musicians, the environment they worked in, and the repertoire they performed at local Jewish lifestyle and communal celebrations.

Netsky defines what klezmer music is, how it helped define Jewish immigrant culture in Philadelphia, and how its current revival has changed klezmer’s meaning historically. Klezmer also addresses the place of musicians and celebratory music in Jewish society, the nature of klezmer culture, the tensions between sacred and secular in Jewish music, and the development of Philadelphia's distinctive “Russian Sher” medley, a unique and masterfully crafted composition.

Including a significant amount of musical transcriptions, Klezmer chronicles this special musical genre from its heyday in the immigrant era, through the mid-century period of its decline through its revitalization from the 1980s to today.
AUTHOR BIOGRAPHY
Hankus Netsky is a member of the faculty of the New England Conservatory in Boston, and is director of its Jewish music ensemble.  He is also the founder and director of the Klezmer Conservatory Band, an internally renowned Yiddish music ensemble.  He has collaborated, performed and recorded with many well-known artists, including Itzhak Perlman and Theodore Bikel.
TABLE OF CONTENTS
Table of Contents
Acknowledgments
Introduction
Part I. The Klezmer Musician
1. The Klezmer Mystique
2. Klezmer Musicians in Jewish Philadelphia, 1900–1945
3. Philadelphia’s Klezmer Tradition: The Later Years
Part II. Musical Traditions
4. Klezmer at Philadelphia’s Jewish Weddings
5. The Evolution of Philadelphia’s Russian Sher Medley
Epilogue
Notes
References
Index
REQUEST ACCESSIBLE FILE