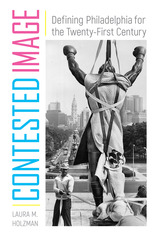 Thomas Eakins’ 1875 painting, The Gross Clinic, the Rocky Statue, andthe Barnes Foundation are all iconic in Philadelphia for different reasons. But around the year 2000, this painting, this sculpture, and this entire art collection, respectively, generated extended—and heated—controversies about the “appropriate” location for each item. Contested Image revisits the debates that surrounded these works of visual culture and how each item changed through acts of reception—through the ways that viewers looked at, talked about, and used these objects to define their city.

Laura Holzman investigates the negotiations and spirited debates that affected the city of Philadelphia’s identity and its public image. She considers how the region’s cultural resources reshaped the city’s reputation as well as delves into discussions about official efforts to boost local spirit. In tracking these “contested images,” Holzman illuminates the messy process of public envisioning of place and the ways in which public dialogue informs public meaning of both cities themselves and the objects of urban identity.

Laura M. Holzman is an Associate Professor of Art History and Museum Studies and Public Scholar of Curatorial Practices and Visual Art at Indiana University, IUPUI.