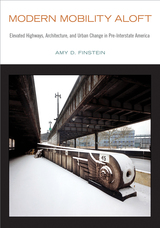 In the first half of the twentieth century, urban elevated highways were much more than utilitarian infrastructure, lifting traffic above the streets; they were statements of civic pride, asserting boldly modern visions for a city’s architecture, economy, and transportation network. Yet three of the most ambitious projects, launched in Chicago, New York, and Boston in the spirit of utopian models by architects such as Le Corbusier and Hugh Ferriss, ultimately fell short of their ideals.

Modern Mobility Aloft is the first study to focus on pre-Interstate urban elevated highways within American architectural and urban history. Amy Finstein traces the idealistic roots of these superstructures, their contrasting realities once built, their impacts on successive development patterns, and the recent challenges they have posed to contemporary urban designers.

Filled with more than 100 historic photographs and illustrations of beaux arts and art deco architecture, Modern Mobility Aloft provides a critical understanding of urban landscapes, transportation, and technological change as cities moved into the modern era.

Amy D. Finstein is an Assistant Professor in the Department of Visual Arts at College of the Holy Cross.