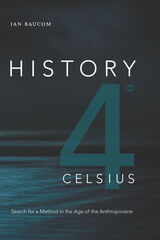 In History 4° Celsius Ian Baucom continues his inquiries into the place of the Black Atlantic in the making of the modern and postmodern world. Putting black studies into conversation with climate change, Baucom outlines how the ongoing concerns of critical race, diaspora, and postcolonial studies are crucial to understanding the Anthropocene. He draws on materialist and postmaterialist thought, Sartre, and the science of climate change to trace the ways in which evolving political, cultural, and natural history converge to shape a globally destructive force. Identifying the quest for limitless financial gain as the primary driving force behind both the slave trade and the continuing increase in global greenhouse gas emissions, Baucom demonstrates that climate change and the conditions of the Black Atlantic, colonialism, and the postcolony are fundamentally entwined. In so doing, he argues for the necessity of establishing a method of critical exchange between climate science, black studies, and the surrounding theoretical inquiries of humanism and posthumanism.
AUTHOR BIOGRAPHY
Ian Baucom is Dean of Arts and Sciences and Professor of English at the University of Virginia. He is the author of Specters of the Atlantic: Finance Capital, Slavery, and the Philosophy of History and coeditor of Shades of Black: Assembling Black Arts in 1980s Britain, both also published by Duke University Press.
REVIEWS
“Giving a conceptual and timely empirical account of the Anthropocene and the problem it presents for the scale of history, Ian Baucom combines intellectual provocation with a series of fascinating insights from the sciences all while taking seriously the imaginative and conceptual challenges that the sciences pose to the humanities. History 4° Celsius will be a major book for the humanities in general. I was enthralled reading it.”

-- Claire Colebrook, author of Death of the PostHuman: Essays on Extinction, Volume 1

“Empirically grounded, theoretically nimble and nuanced, generous toward those whose ideas he opposes and yet resolute in his opposition, Ian Baucom develops in this book a powerful, self-reflexive, and original approach to questions of methods in the emergent field of Anthropocene humanities. His argument will deeply interest postcolonial critics and other humanists as they ponder and negotiate the planetary environmental crises that so mark our times. An exemplary and thoughtful contribution.”

-- Dipesh Chakrabarty, author of The Crises of Civilization: Exploring Global and Planetary Histories

“History 4° Celsius is a complexly argued book that adds to the many interesting humanistic perspectives on the Anthropocene circulating today.”