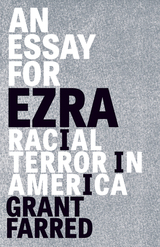 An intensely personal, and philosophical, account of why white America’s racial unconscious is not so unconscious

An Essay for Ezra is a critique of terror that begins but by no means ends with the presidency of Donald J. Trump. A father addresses his son and a boy shares his observations in a dynamic dialogistic exchange that is a commentary of and for its time, taking the measure of racial terror and of white supremacy both in our moment and as a historical phenomenon.

Framed through the experiences of the author’s biracial son, An Essay for Ezra is intensely personal while also powerfully universal. Drawing on the social and political thought of James Baldwin and Martin Luther King, Grant Farred examines the temptation and the perils of essentialism and the need to discriminate—to engage the black mind as much as the black body. With that dialectic as his starting point, Farred engages the ideas of Jameson, Barthes, Derrida, Adorno, Kant, and other thinkers to derive an ethics of being in our time of social peril. His antiessentialist racial analysis is salient, especially when he deploys Dave Chappelle as a counterpoint to Baldwin—and Chappelle’s brilliant comic philosophic voice jabs at both racial and gender identity.

Standing apart for its willingness to explore terror in all its ambivalence, this theoretical reflection on racism, knowledge, ethics, and being in our neofascist present brings to bear the full weight of philosophical inquiry and popular cultural critique on black life in the United States.

Grant Farred is author of Martin Heidegger Saved My Life; In Motion, At Rest: The Event of the Athletic Body; and What’s My Name? Black Vernacular Intellectuals, all from Minnesota.

"You can’t reassure the frightened child. Your letter must add to the child’s terror. Welcome to the world of racism in America. Brilliantly original, mixing Heidegger and Chappelle, Grant Farred proves that Baldwin’s genre has not exhausted its magical potential to provoke and instruct. By a mysterious dialectical legerdemain, he bestows on his son an unlikely endowment: a sort of Afro-optimism, both outraged and salvific."—Bruce Robbins, author of The Beneficiary

"Phrased as an epistle to his young son, Grant Farred's An Essay for Ezra grapples with difficult loci of racial violence in U.S. culture and in various philosophical traditions, from the Black exile of Baldwin to Heideggerian questionability of self. He proposes new genealogies and new problems for struggles of becoming and judgment amid the perpetual crisis that is the American racial order."—Rei Terada, University of California, Irvine

5. Haunting: It Takes You Where You Don’t Want to Go

6. And So I Turn to James Baldwin

7. Do Not a Tarantula Be: A Nietzschean Interlude