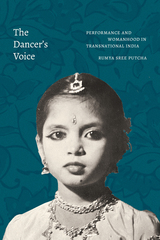 In The Dancer’s Voice Rumya Sree Putcha theorizes how the Indian classical dancer performs the complex dynamics of transnational Indian womanhood. Putcha argues that the public persona of the Indian dancer has come to represent India in the global imagination—a representation that supports caste hierarchies and Hindu ethnonationalism, as well as white supremacist model minority narratives. Generations of Indian women have been encouraged to embody the archetype of the dancer, popularized through film cultures from the 1930s to the present. Through analyses of films, immigration and marriage laws, histories of caste and race, advertising campaigns, and her own family’s heirlooms, photographs, and memories, Putcha reveals how women’s citizenship is based on separating their voices from their bodies. In listening closely to and for the dancer’s voice, she offers a new way to understand the intersections of body, voice, performance, caste, race, gender, and nation.
AUTHOR BIOGRAPHY
Rumya Sree Putcha is Assistant Professor of Music and Women’s Studies at the University of Georgia.
TABLE OF CONTENTS