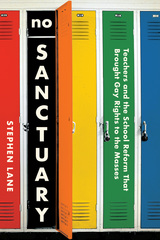 School can be a special sort of nightmare for LGBTQ youth, who are sometimes targets of verbal or physical harassment with nowhere to turn for support. No Sanctuary tells the inspiring story of a mostly unseen rescue attempt by a small group of teachers who led the push to make schools safer for these at-risk students. Their efforts became the blueprint for Massachusetts’s education policy and a nationwide movement, resulting in one of the most successful and far-reaching school reform efforts in recent times. Stephen Lane sheds light on this largely overlooked but critical series of reforms, placing the Safe Schools movement within the context of the larger gay rights movement and highlighting its key role in fostering greater acceptance of LGBTQ individuals throughout society.
AUTHOR BIOGRAPHY
STEPHEN LANE is a high school teacher. He lives in Concord, Massachusetts, with his wife and son.
TABLE OF CONTENTS


Acknowledgments • Introduction: The Path to Reform • Out of the Shadows and into Parades • Fears of a Petticoat Regime: Character and Education in the United States • Postwar Hysteria: The Red Menace and Lavender Lads • Oranges, Banana Cream, and Beauty Queens: The Fight over Gay Teachers Comes out of the Closet • Homosexuality Enters the Classroom: Shining a Light on the Problem • Reforms Go Public • Pulpits, Pink Triangles, and Basement Meetings: Private Schools Join the Movement • Teaching, Learning, and Moving up the Hierarchy: School Leadership Joins the Movement • Promises, Promises: The Movement Goes Political • An Enormous Pressure to Succeed: From Promises, Promises to a Statewide Policy • The Massachusetts Model Goes Nationwide • Now What? • Acronyms and Abbreviations • Notes • Index