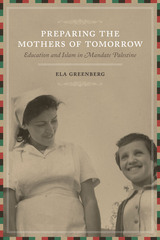 From the late nineteenth century onward, men and women throughout the Middle East discussed, debated, and negotiated the roles of young girls and women in producing modern nations. In Palestine, girls' education was pivotal to discussions about motherhood. Their education was seen as having the potential to transform the family so that it could meet both modern and nationalist expectations.

Ela Greenberg offers the first study to examine the education of Muslim girls in Palestine from the end of the Ottoman administration through the British colonial rule. Relying upon extensive archival sources, official reports, the Palestinian Arabic press, and interviews, she describes the changes that took place in girls' education during this time. Greenberg describes how local Muslims, often portrayed as indifferent to girls' education, actually responded to the inadequacies of existing government education by sending their daughters to missionary schools despite religious tensions, or by creating their own private nationalist institutions.

Greenberg shows that members of all socioeconomic classes understood the triad of girls' education, modernity, and the nationalist struggle, as educated girls would become the "mothers of tomorrow" who would raise nationalist and modern children. While this was the aim of the various schools in Palestine, not all educated Muslim girls followed this path, as some used their education, even if it was elementary at best, to become teachers, nurses, and activists in women's organizations.

Ela Greenberg is Research Fellow at the Harry S. Truman Institute for the Advancement of Peace at the Hebrew University of Jerusalem.