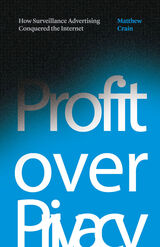 The contemporary internet’s de facto business model is one of surveillance. Browser cookies follow us around the web, Amazon targets us with eerily prescient ads, Facebook and Google read our messages and analyze our patterns, and apps record our every move. In Profit over Privacy, Matthew Crain gives internet surveillance a much-needed origin story by chronicling the development of its most important historical catalyst: web advertising.

The first institutional and political history of internet advertising, Profit over Privacy uses the 1990s as its backdrop to show how the massive data-collection infrastructure that undergirds the internet today is the result of twenty-five years of technical and political economic engineering. Crain considers the social causes and consequences of the internet’s rapid embrace of consumer monitoring, detailing how advertisers and marketers adapted to the existential threat of the internet and marshaled venture capital to develop the now-ubiquitous business model called “surveillance advertising.” He draws on a range of primary resources from government, industry, and the press and highlights the political roots of internet advertising to underscore the necessity of political solutions to reign in unaccountable commercial surveillance.

The dominant business model on the internet, surveillance advertising is the result of political choices—not the inevitable march of technology. Unlike many other countries, the United States has no internet privacy law. A fascinating prehistory of internet advertising giants like Google and Facebook, Profit over Privacy argues that the internet did not have to turn out this way and that it can be remade into something better.

Matthew Crain is assistant professor of media and communication at Miami University.

1. The Revolution Will Be Commercialized

2. A Framework for Global Electronic Commerce

3. The Web Gets a Memory

7. The Legacy of the Dotcom Era