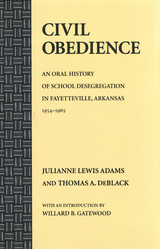 Among the many changes that have occurred in our country in the last forty years, few have been as significant as those heralded by the Supreme Court's decision in the Brown vs. Board of Education case in 1954. By declaring racially segregated public schools unconstitutional, the court set in motion forces that resulted in the dismantling of the legal structure of Jim Crowism. The impact of the Brown decision was national in scope, but in no other region was its impact more far-reaching and traumatic than in the South. In Arkansas, as in other Southern states, racial segregation was not merely a well-stablished way of life, it was firmly imbedded in law.

While school desegregation generated much noise and some violence elsewhere in the South, the city of Fayetteville, Arkansas confronted the issue and resolved it with a good deal of dignity and grace, becoming the first Southern city to accommodate the Brown decision.

Through this fascinating collection of interviews with those who were involved in the desegregation process—students, teachers, administrators, civic leaders, and members of local groups—we learn of the determination of citizens to obey the law of the land and to see that freedom and equality took priority over their commitment to a school system that patently discriminated against one group of citizens.

In our continuing efforts to create a society in which all races and cultures can coexist, Civil Obedience is a story worthy of our full attention.