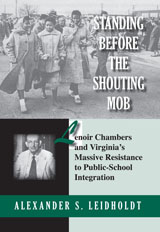 A southern journalist campaigns for racial understanding during the
struggle over school desegregation in Virginia.

In 1958 the nation's attention was focused on Norfolk,
Virginia, where nearly ten thousand students were locked out of their schools.
Rather than comply with the desegregation mandate of Brown v. Board
of Education, Governor J. Lindsay Almond, supported by the powerful
political machine of Senator Harry F. Byrd, Sr., had closed Norfolk's white
secondary schools.

Massive resistance to integration transformed Norfolk
into a civil rights arena. Although the process by which Norfolk's schools
were integrated was far from orderly, the transition was characterized
by debate, political maneuvering, and judicial action--not violence. Lenoir
Chambers, editor of the Norfolk Virginian-Pilot, conducted a five-year
editorial campaign supporting the peaceful implementation of the Court's
order. The Pilot was Virginia's only white newspaper to take this
position. Chambers was later awarded a Pulitzer Prize for his editorials.

Utilizing a wide range of primary and secondary sources,
Standing before the Shouting Mob examines Chambers's campaign, explores
the influences that shaped his racial views, and places him within the
context of southern journalism. The book also provides a detailed analysis
of Virginia's massive resistance and Norfolk's school closing.

Alexander Leidholdt is Assistant Professor of Communication
at Purdue University.